Below is a Phoenix housing market update for March 2021 provided by The Cromford Report. It features some of the most important stats and news our clients ask us about on a regular basis.

If you would like similar information about the real estate market in a specific city or zip code within the Greater Phoenix Area, let us know! We’d be happy to send it to you. 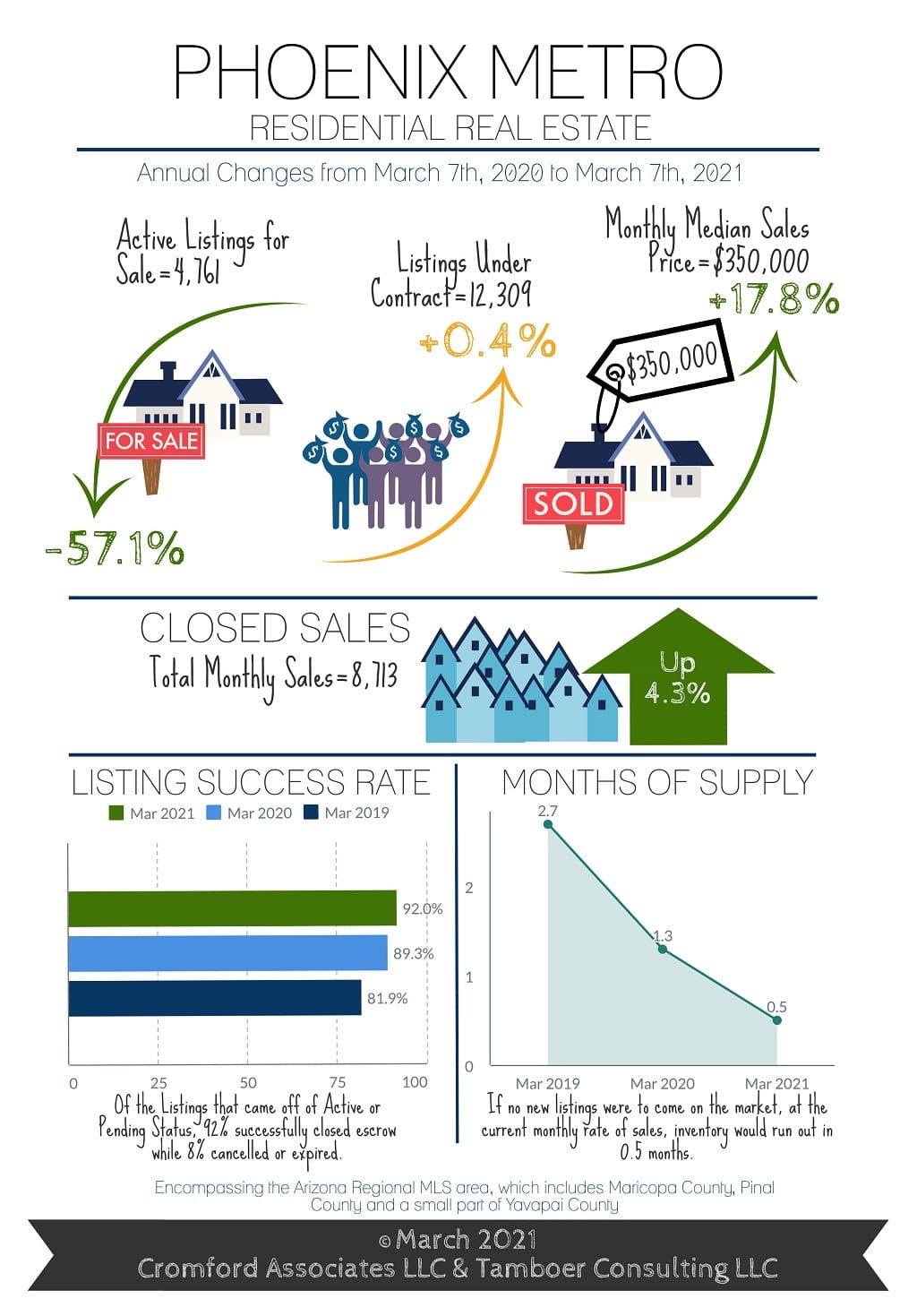 Over the past 6 weeks, REALTORS® have added an average of 2,059 new listings per week to the Arizona Regional MLS. During the same time period, an average of 2,312 contracts were accepted per week. This is what has caused the overall supply of homes to consistently drop and competition between buyers to escalate.

While just over 2,000 new listings per week may seem like a lot, it’s actually the lowest rate for this time of year in at least 20 years. A normal level would be considered around 2,500 new listings.

While supply is still 77% below normal for this time of year and demand is 17% above normal, demand has been dropping faster than supply over the last 30 days. It’s not noticeable when one is in the midst of a contract negotiation today because sellers rarely notice when they’re getting, for example, only 15 offers instead of 25. But consider last December demand was 35% above normal; at this rate, demand could be at a normal level in a couple months and below normal by June. This will not cause prices to decline because there are still a minuscule number of competing listings in the MLS, but it could mean that the second half of 2021 could look different from the first, especially if there’s a temporary boost in new listings after the forbearance period ends and the foreclosure moratorium is lifted.

The average mortgage rate rose to 3.02% this month according to Freddie Mac. Even though this is still considered an excellent rate, it understandably weakens the purchasing power for some buyers and reduces the affordability measure for Greater Phoenix overall. When a family making the median income can afford less than 60% of what’s selling, demand is typically expected to suffer.

However, buyers with median incomes coming from Los Angeles and San Francisco are used to only affording 9-11% of what’s selling in their home towns, so Greater Phoenix prices look amazing by comparison. In fact, for some the idea of being able to own a home at all is amazing.

MORE FROM THE BLOG